To GraSPP, SIPA, and Beyond

It has been almost two months since I graduated from GraSPP and became a working woman once again. Looking back, the two years at GraSPP were indeed a luxury.
I entered GraSPP’s Master of Public Policy International Program class of 2014, and for my second year I studied at Columbia University’s School of International and Public Affairs (SIPA). The two schools have different strengths that make them unique. At SIPA, the mega-school which has 500 students with diverse backgrounds from all over the world, discussion was always stimulating. In contrast, at much cozier GraSPP you can find true friendship. Through working on term-long projects and tough problem sets together, I made some life-time best friends. 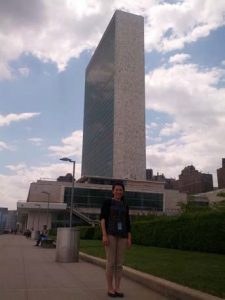 However, if you want to pursue something in depth, your school won’t be the only place for a learning opportunity. One thing I learned from my two years was to keep looking outside, while getting the most out of the current environment. For instance, I studied at Komaba Campus among engineering students in addition to economics and management classes at GraSPP’s Hongo Campus. Similarly, I chose to study abroad at SIPA in order to further concentrate on my research topic from the beginning: the harmonization between development and disaster risk management policies and mainstreaming disaster management in developing countries. At SIPA, an important part of my study involved interviews and fieldworks outside of the classroom. I have to admit that I struggled with the language barrier, but the first-hand accounts and local interactions were definitely something I would not have been able to obtain from lectures and textbooks.
I stated earlier that the two years were a luxury. To put it another way, as a student you are free to take any kind of approach towards your topic. I suggest all of you to continuously seek for learning opportunities, not just at GraSPP, but also elsewhere at the University of Tokyo, and beyond.
Currently, I am working at the international division of a Japanese company which specializes in geospatial information. Our work assists developing countries’ development, urban planning and disaster risk management; in basic terms, an accurate understanding of their lands. Though I face many new (and difficult) things to learn every day, so far it has been very rewarding and exciting.