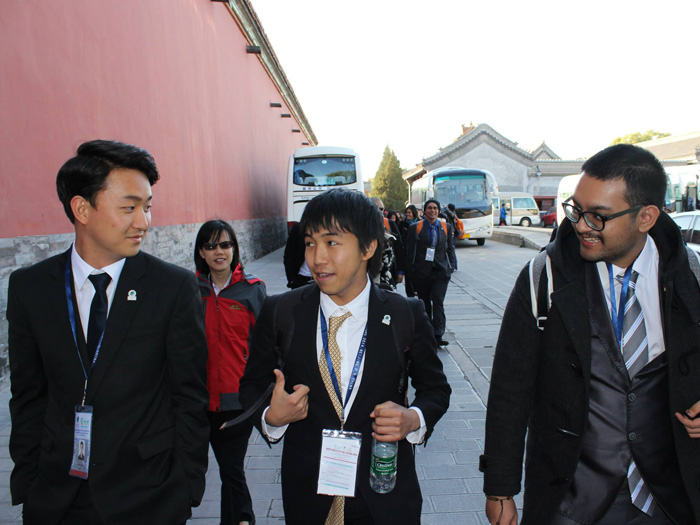 The principal reason why I participated in APEC VOF was to discuss the importance of entrepreneurship and human network in Asia Pacific region, which is also my research interest, with participants and business leaders from different parts of the world, and to broaden my personal connection for the development of my own activities. In this sense, this conference was a great success for me.

In particular, I had a precious opportunity to address a speech as the representative of Japanese delegation at the opening forum on the first day. Even though the topic was suddenly changed to “education and employment” with a short notice, this allowed the entire Japanese delegation to share our opinions about our own society.

The forum was conducted based on the international protocol. First, each representative stated the current situation and prospects on the given topic in alphabetical order of economy name, and then the discussion was opened to the entire hall.

As the representative of Japan, considering the main purpose of APEC, I explained the brief history of Japanese economy after the World War II, and the problems that our generation face, who were born after the collapse of the bubble economy. I introduced the Japanese virtue of “following the social norms” but pointed out that the problem lies in the fact that we tend to regard homogeneousness as the “rules to follow” and thus the “right answer,” even though there is no single answer to the problems that we face. Even though norms and entrepreneurship are not mutually exclusive, we need to achieve cooperation between every actor in the society to create a diverse and tolerant society to cherish both rules and entrepreneurship. For instance, more and more entrepreneurial education programs are provided to students nowadays, but as long as major companies stick to the formalistic New Graduates hiring system, the risk to “get off the rail” will get higher, thus, there exists a structural problem, where the number of students who take a step forward to challenge themselves would not increase as the consequence of rational choice by each youth.

At last, I concluded that this lesson is not only for Japan but for the entire globalizing society, where we are expected to utilize each other’s strength and cope with people from different backgrounds, and that the youths of Japan are determined to tackle the problem and keep spreading our words to the world.

What surprised me at the conference was that the speeches of every representative had a common message, even though there was no pre-meeting about the contents, and the main focus of the forum was integrated into the importance of entrepreneurship and the creation of human resource network. This gave me an impression that the problems that we are facing as VOF are something that we all share in common, and there is a great room to achieve cooperation among all the economies to overcome the difficulties. In this sense, I re-recognized the importance of my own attempt to create global network of entrepreneurs, and gained further momentum to create larger impact to the society together with all the VOF participants, which has now become a large family.