Fortune had not meant the first arrival to Japan of the Bavarian botanist Philipp Franz von Siebold to be an easy one in 1823. He not only had had to endure an arduous voyage during the course of which he almost drowned somewhere in the East China Sea, where his ship had made the unpleasant acquaintance with a typhoon. Upon landing, he learned that he would not be allowed to leave the Dutch trading post in Nagasaki. This was the era of sakoku, “chained country”, in which foreigners were forbidden to enter the country and Japanese were forbidden to leave—on penalty of death.

How times have changed. Not only was my 12-hour flight to Tokyo unremarkable, but I could not have received a warmer welcome from the GraSPP students and staff. The School does its utmost to make sure the transition to life in Tokyo is as smooth as possible. There is an extended orientation week with a host of events and fellow native students help with bureaucratic affairs such as registering for the (obligatory) health insurance programme as tutors. Such help is vital given that most Japanese off campus are either incapable of speaking English or reluctant to do so. At GraSPP, there is certainly no shortage of assistance when it comes to alleviating the cultural shock.

And a cultural shock there will be. They say that, compared with von Siebold’s time, exploring foreign countries has become infinitely simpler through modern means of communication and transportation; through the same technology, though, people around the world become more alike, which makes such exploration less fascinating. That is not true for Japan. Yes, it has a wealthy, modern society that shares many characteristics with those in Europe, North America and, of course, East Asia. But in no other country that I have been to so far do people take such an inconspicuous pride in their own culture. By definition, every culture in this world is unique, but from what I have learned during my stay, the Japanese, more than most other peoples, tend to think their culture is particularly distinct. We will keep the debate on the accuracy of this notion for another day. The fact remains that living in Japan feels different.

Your fellow students at GraSPP will make sure you will not forget that. I have thoroughly enjoyed the uncountable evenings spent withizakaya (relaxed dinner with drinks—or drinks with some food?) and eating sushi from the conveyor belt. And then there’s of course karaoke. Tokyo is a hell of a city, an urban jungle that seems to have been taken directly from science-fiction movies and that will not bore you once. Like most world cities Tokyo is not a cheap place, but the GraSPP staff will do their best to give you access to scholarships.

In stark contrast to von Siebold, international students today are not only allowed to leave Tokyo but are encouraged to do so. GraSPP organised (and financed) a trip for all incoming foreign students at the beginning of the semester that took us to mountainous Nagano prefecture with its highly worthwhile castles, temples and museums. Moreover, I ventured forth into the mountains frequently to leave behind the hustle and bustle of Tokyo and enjoy the tremendous natural beauty of the coasts and mountains around the capital. My tight schedule lamentably did not allow me to climb famous Mount Fuji, but postponed isn’t cancelled, as they say.

The multitude of cultural experiences that I had in Japan were undeniably superb, but what about academic life at GraSPP? The School managed to surpass my initial high expectations as I had the privilege to learn about Japanese and Asian affairs from professors who enjoy distinct reputations in Japanese and even global academic and policy circles. Beyond their impressive professional credentials and their formidable knowledge of their subject matters, these professors such as Takatoshi Ito (Economics), Nobuo Tanaka (Energy Policy), Hitoshi Tanaka (Foreign Policy), Keisuke Iida and Gregory Noble (both Political Economy) are also adept teachers who know how to get across their points. They and most other teaching staff at GraSPP have considerable international experience and are highly proficient in the English language—that is no self-evident finding even at the University of Tokyo, the country’s most prestigious university. I dare say that if you want to learn about policy-making in Asia in general and in Japan in particular, GraSPP is one of the eminent institutions to go to.

All in all, with respect to both my professional and my personal development, I profited highly from my stay at GraSPP. The only regret I had in the end was the fact that, due to obligations at my home university, I could not stay for a longer period of time. However, once again I mean to follow in von Siebold’s footsteps, who, after having been expelled for life in 1829 for attempting to smuggle maps and other stuff out of the country, returned to Japan three decades later. I am certain my return won’t be that long in coming. 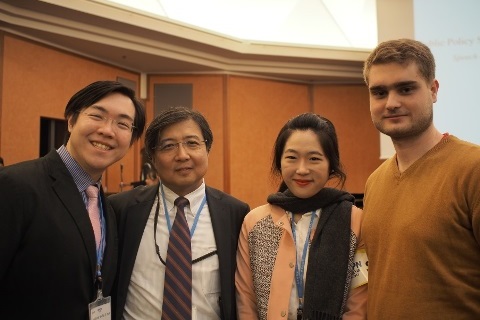