I feel truly privileged to be selected as one of two student interns in the first summer internship program with Mitsubishi Corporation (MC) through the Graduate School of Public Policy. The internship was hosted by the CSR & Environmental Affairs Department; but with the participation of other departments via presentations on their roles within the company.

Through the various presentations, we learned that Japanese “sogo shosha” are very much different from the usual English translation of “trading company” in that the latter does not accurately portray the depth and breadth of the former’s actual activities in the world economy. We learned about the history of MC starting from the founder, Yataro Iwasaki, to the reconstruction, and finally to the modern era. We learned about the company’s and other sogo shosha’s role in nation building and how they provided the backbone of Japanese industry and economy which still continues to this day. Lastly and as a theme that will recur throughout the internship, we learned of the Three Corporate Principles (sankoryo) of MC: corporate responsibility to society (shoki hoko), integrity and fairness (shoji komei), international understanding through business (ritsugyo boeki). This is the soul of the company and is evident in all aspects of its operations; such as doing CSR even well before the term was coined.

The presentations of the other various departments on topics such as logistics, security compliance, energy, press relations, etc. have left us with a better understanding of the scope of operations and the relevant ancillary concerns. The most fascinating and memorable lessons, for this intern, was learning about MC’s environmental projects and philanthropic activities such as various conservation efforts across the globe (actively participated-in, if not lead by MC) like forest restoration, coral research, disaster relief, employee volunteerism etc. It is awe inspiring to see what a global company can achieve and observe the impact of its actions the world over; especially its style of engaging with relevant stakeholders to arrive at the best possible outcome. It is admirable that the company strongly believes in the concept of being a good corporate citizen of the world and that it is driven by that belief to be ethical and responsible in its actions.

For our tasks, we researched on the topic of Food Security, specifically current problems, potential future problems, and possible knock-on effects to other areas such as water and energy. We also attended a seminar hosted by Caux Roundtable on human rights issues of child labor and forced labor where we learned about the views of multiple stakeholders such as NGOs, corporations, and government. After which we made a short presentation on human rights’ relevance to the company by focusing on supply chain management. During the course of our research into the topic, it was motivating to learn how MC is adopting current best practices and even leading in some areas to actively safeguard human rights of not only their employees but also the rights and welfare of the communities they operate in as well.

Aside from office work, we also had a chance to visit some of the sites associated with MC through the Iwasaki family such as the former Iwasaki residence and the Toyo Bunko. This was fascinating and highly educational as we learned more about the history and interests of the founding family; providing us with background and scene-setting on the early days of MC.

I am truly grateful to the Graduate School of Public Policy and MC for the opportunity to glimpse and learn from the soul of one of the world’s premier corporations. I will also cherish the camaraderie and friendships formed with the employees of MC who took care of us and made us feel welcome, and with my fellow interns whose teamwork and cooperation made the internship experience memorable. 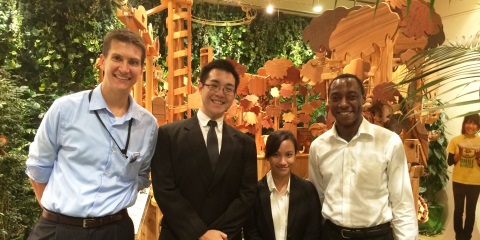