2021 The 14th GPPN Annual Conference in GraSPP, The University of Tokyo 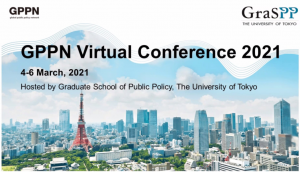 We are delighted to report that GraSPP successfully hosted the annual GPPN Conference on 4-6 March 2021. As you may know, GPPN is an alliance between seven of the leading schools of public policy worldwide, namely LKY School of Public Policy at NUS, Hertie School of Governance, Sciences Po, LSE School of Public Policy, SIPA at Columbia University. FGV in Sao Paulo, and GraSPP. Every year, GPPN organises a conference where student groups present their projects in relation to the conference topic, while the Deans discuss plans for the further development of GPPN (at the Deans’ meeting, a closed-door meeting), have a public roundtable, and other events take place for the students and the public to attend.

This year, the topic of the Conference was “The Crisis of Globalisation as We Know It”, namely a reflection on how globalisation has been facing increasingly stronger headwinds after the 2008-2009 financial crisis, culminating in the current Covid-19 pandemic, which has disrupted economic activity worldwide. Because of the pandemic, this 2021 Conference was an online event only. For the first time, we asked the competing student groups to produce a short 4-minute video about their project, that the Conference attendees could watch in advance of the event. At the Conference, each group delivered a 3-minute presentation followed by a 5-minute Q&A sessions with the Deans, who constituted the jury deciding which groups were admitted to the finals, and eventually won the awards. The Conference contained two public events, the Deans’ Roundtable, and a session with two distinguished guest speakers, namely Ms. Yumi Araki, journalist and multiplatform storyteller, and my Mr. Bilahari Kausikan, former Ambassador of Singapore and Chair of the Middle East Institute of the National University of Singapore. At the Deans’ Roundtable, which was moderated by GraSPP Professor Hideaki Shiroyama, the Deans discussed the digitalisation of the society, of public policies, and its impact on what and how schools of public policies are teaching or should be teaching. The guest speaker session provided the opportunity for a lively exchange between the speakers and the audience, resulting in an articulated and stimulating conversation about cultural and social changes over the course of the past 25 years, and about the international political changes that the world is currently undergoing, particularly a more inward-looking and relatively declining West consequence on the globe. Both events were very well-attended and successful beyond expectations. 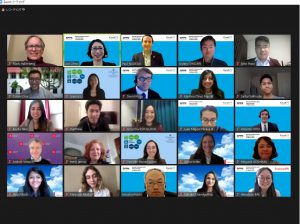 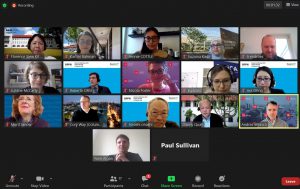 The student group competition proceeded smoothly with the presentations delivered by seven finalist groups. Competition was very tight as all projects were evaluated highly, and score differences were minimal. Consequently, the Deans decided to provide some acknowledgement to each finalist group. GraSPP NICE project, aimed at reducing the political polarisation in the US society, won the special “education award” for its particular focus on education activities as a positive instrument for social change and betterment. Congratulations and thank you for defending the good reputation of GraSPP!

Overall, the Conference went very smoothly and was genuinely praised by all attendees as a logistical and organisational success, despite the numerous challenges inherent to the organisation of such a large-scale online event with participants from very different time zones, and requiring many months of preparations. Such success would have not been possible without the restless work and dedication of our great GraSPP staff, particularly Ms. Aoi Ohno and Ms. Megumi Aoshima, of our TA GraSPP student Jeremy Jee, as well as the MCs PhD candidates Paul Nadeau and Kotaro Shiojiri, to whom goes all our gratitude for their truly outstanding effort. We are grateful to our Dean Professor Hiroshi Ohashi for acting as chair during various sessions, and for his excellent job in representing the School. A special mention goes of course to all GraSPP students who have participated in GPC and consequently to the GPPN Conference, presenting their project. Thank you to you all, especially in this difficult time, for your participation in an activity which unfortunately could not provide you with any opportunity to travel, but you nevertheless accepted to be active and transform this opportunity into a successful event which reinforced the image of our School in the world.