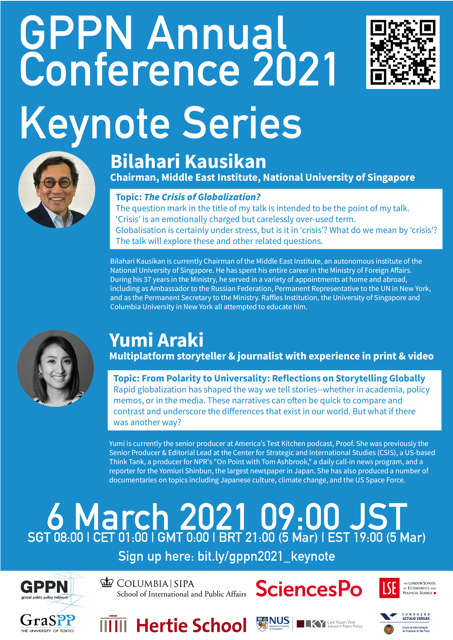 The question mark in the title of my talk is intended to be the point of my talk. ‘Crisis’ is an emotionally charged but carelessly over-used term. Globalisation is certainly under stress, but is it in ‘crisis’? What do we mean by ‘crisis’? The talk will explore these and other related questions.

2. “From Polarity to Universality: Reflections on Storytelling Globally” by Yumi Araki, Multiplatform storyteller and journalist with experience in print, video, and radio

Rapid globalization has shaped the way we tell stories–whether in academia, policy memos, or in the media. These narratives can often be quick to compare and contrast and underscore the differences that exist in our world. But what if there was another way?

Bilahari Kausikan is currently Chairman of the Middle East Institute, an autonomous institute of the National University of Singapore. He has spent his entire career in the Ministry of Foreign Affairs. During his 37 years in the Ministry, he served in a variety of appointments at home and abroad, including as Ambassador to the Russian Federation, Permanent Representative to the UN in New York, and as the Permanent Secretary to the Ministry. Raffles Institution, the University of Singapore and Columbia University in New York all attempted to educate him.

Yumi Araki
Multiplatform storyteller and journalist with experience in print, video, and radio

Yumi is currently the senior producer at America’s Test Kitchen podcast, Proof. She was previously the Senior Producer & Editorial Lead at the Center for Strategic and International Studies (CSIS), a US-based Think Tank, a producer for NPR’s “On Point with Tom Ashbrook,” a daily call-in news program, and a reporter for the Yomiuri Shimbun, the largest newspaper in Japan. She has also produced a number of documentaries on topics including Japanese culture, climate change, and the US Space Force.