Learning how to dance in the rain 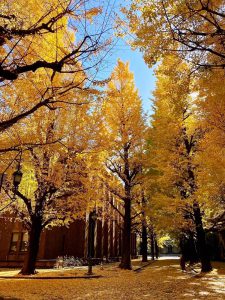 It still feels unreal that my two years of graduate study as a double-degree student have come to an end.
The first year at GraSPP was filled with adventures as we were still adjusting ourselves to the unfamiliar online classroom settings, greeting professors and fellow students in front of the camera from different time zones, and worried about internet connections from time to time (especially during presentations haha). Nonetheless, the intellectually stimulating environment led me to concentrate on learning from others and many professors kept a cap on class enrollment to ensure a productive exchange of opinions. The core and elective courses at GraSPP not only enabled me to enjoy dynamic conversations with peers, scholars, and policy practitioners but also prepared me with fundamental skills which later empowered me to land an internship at UN Women HQ in my second year. My first year at GraSPP has made me realize that we can always learn to embrace the changes in our lives as an old saying goes: Life isn’t about waiting for the storm to pass. It’s about learning how to dance in the rain. 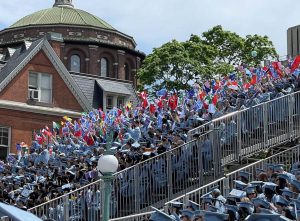 Studying at SIPA was a brand-new experience, a year full of excitement and growth. I had the privilege to have in-person classes after SIPA had three years of remote teaching since the outbreak of the pandemic. I was able to meet former and present high-level governmental officials and well-renowned intellectuals from various countries and listen to their discussions of essential policies and implications. And we even had Hilary Clinton come to the Commencement to receive an honorary degree and respond to students’ calls for her speech by sharing impromptu remarks. 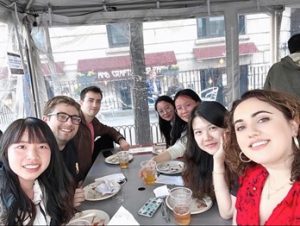 With my Capstone Team for celebrating the end of our project

In addition, I managed to intern at UN Women to help advance gender equality, something that I have always dreamed of, and work on a team capstone project on sovereign environmental performance while being a full-time student. Looking back, these experiences became incredibly valuable and rewarding.

I am very grateful for what GraSPP and SIPA have shaped me in so many aspects and enabled me to make some lifelong connections and have so much memory and satisfaction.