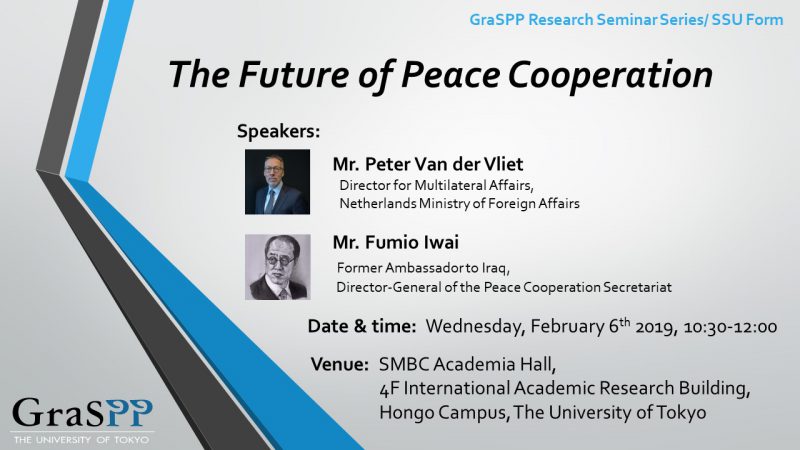 Director Van der Vliet and Director-general Iwai will be discussing the future of international peace cooperation by drawing from their own extensive experience. How have peacekeeping missions evolved? What are the challenges of past and ongoing operations? And, more importantly, how can we learn from them? Using examples of recent operations, both speakers will shed their light on the question of how we can boost the effectiveness of international peace cooperation. How can we improve and reform the United Nations system and make multilateral cooperation in this field more sustainable?

Speakers’ biography:
Mr. Peter Van der Vliet has been Director for Multilateral Organisations and Human Rights of the Ministry of Foreign Affairs of the Kingdom of the Netherlands since 2015. He is also Ambassador for the Sustainable Development Goals. Prior to his current appointment in The Hague, Peter served as the Dutch Deputy Permanent Representative to the UN in New York. Before this, he had several postings including as Deputy Head of Mission in Jordan, First Secretary in New Delhi and with the Department for Security Policy Affairs. Peter joined the Ministry of Foreign Affairs in 1990. He studied political science and international relations at Erasmus University in Rotterdam. Peter is married with three children.

Mr. Fumio Iwai has been Director General of Secretariat of the International Peace Cooperation Headquarters of the Cabinet Office of Government of Japan since 2018. In prior to his current position in Tokyo, he was Ambassador Extraordinary and Plenipotentiary in Iraq. He has served for 34 years in foreign service, holding positions such as Deputy Director-General of Middle Eastern and African Affairs Bureau of the Ministry of Foreign Affairs, Deputy Consul-General of Japan in New York, and Minister and Deputy Chief of Mission of Embassy in Saudi Arabia. He studied law at Kyoto University. Fumio is married with three children.