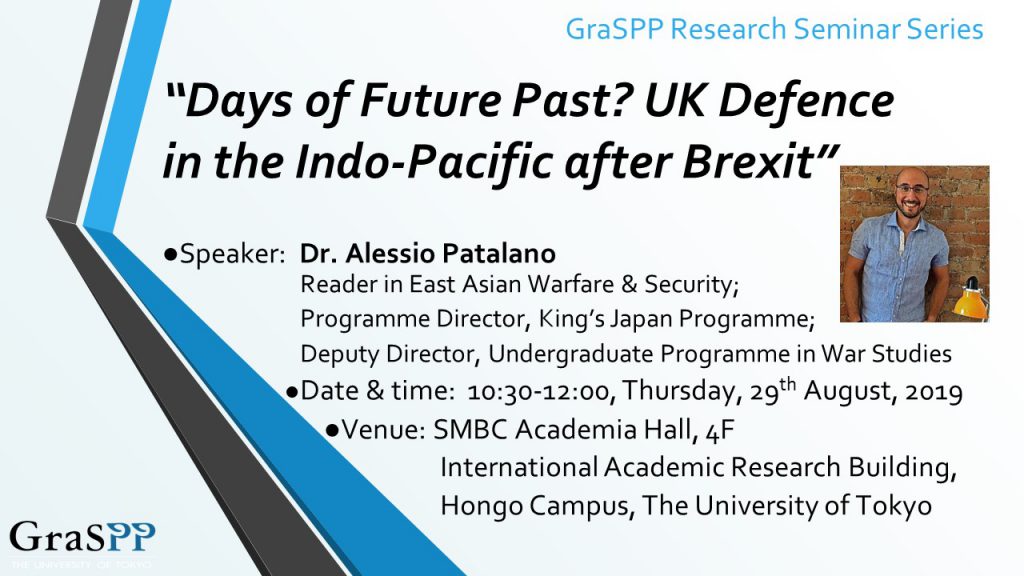 Title: “Days of Future Past? UK Defence in the Indo-Pacific after Brexit”

The UK political world has been in turmoil for the past few months. Whilst Brexit has dominated the agenda, on defence matters, a quiet but rather unprecedented debate has emerged in government and Parliament about the role the UK should play in East Asian security. This debate has gained momentum between March and this past month.

In this GraSPP seminar, Dr. Patalano will discuss the following questions drawn from recent such discussions. How important is the Asia Pacific region to the UK? What are the UK’s strategic interests in this region? What is the most suitable posture to meet their requirements?

The answers to these questions draw upon two papers Dr. Patalano has published focusing both on the defence debates from the 1960s defence posture review – the last time East Asian Security was debated among London officials – and on the experience of recent defence engagement in the region:

Dr. Alessio Patalano is Reader in East Asian Warfare & Security at the Department of War Studies, King’s College London, and Visiting Fellow at the Japan Maritime Staff and Command College, Tokyo and Temple University Japan. He is the Director of the King’s Japan Programme, and he specializes in Japanese naval history and strategy, and Sino-Japanese maritime relations in the East and South China Seas.

His latest monograph titled Post-war Japan as a Seapower: Imperial Legacy, Wartime Experience, and the Making of a Navy was published by Bloomsbury in 2015.