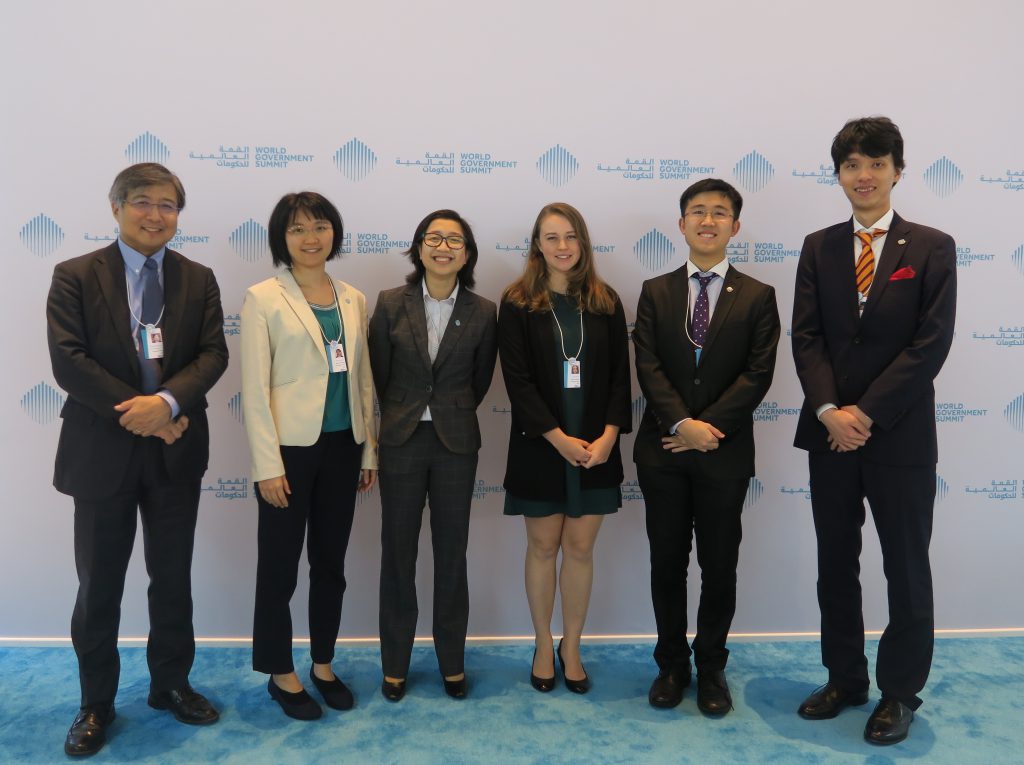 A team of five GraSPP students was invited to participate in the Global Universities Challenge in Dubai on February 10-12. The annual event with its full title “The Shaping Future Governments: Global Universities Challenge” is hosted by the World Government Summit and exclusive to select graduate students of public policy, government relations, political science, and business administration. As an integral part of the Annual Gathering of the World Government Summit, “the Challenge brings together over 100 students from renowned universities across the globe and engages them in an innovative competition to improve the way governments work.” While our team missed prizes and awards, the organizer acknowledged that the team’s presentation was amongst the few that stood out and suggested their willingness to invite a GraSPP team in the next Global Universities Challenge. A team from Tuck School of Business of Dartmouth College won the first place, overcoming teams from the Harvard Kennedy School, London Business School, the University of Oxford and other world’s leading schools. The team’s presentation video as well as other performance record are now available here. 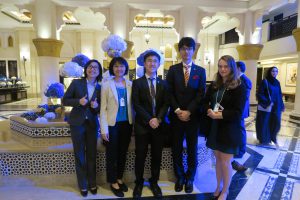 “The Global Universities Challenge during the World Government Summit was a truly amazing experience. Being interested into human security and peace-building issues for quite a long time, I was both excited and stressed by the different challenges this year’s topic brought to us. Working on a post-conflict situation allowed us to make use of our academic and professional background. Although I did not go to any of the biggest conferences, as compared to my fellow teammates, I was able to feel the importance of such international event. We also decided to discuss our proposal to some of the participants of the summit and this human contact was, in my view, the highlight of this project. We got many feedbacks which showed the interest our project could gather as well as some new perspectives to our proposal. I believe this also showed to the summit participants how committed and enthusiastic our generation of young students is to find innovative solutions to old issues. As the speaker of our group, I felt very much honored and can only think of this as a very instructive experience which will definitely serve me in the future. This encouraged me to continue on the path I have chosen so far, with the grand goal to bring my own contribution to our future, and encourage anyone who wants to participate to do so as they will definitely not regret it.” by Anaïs Briault 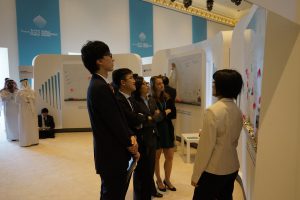 “The participation to the Global Universities Challenge in Dubai was a rewarding and invaluable experience to compete with top public policy and business schools around the world. The host of the competition, the World Government Summit, was eye-opening to hear the comments and expertise from renowned figures such as Christine Lagarde, Paul Krugman, and Saskia Sassen. The ambitious challenge to solve the severe problems of a hypothetical failed state pushed our group’s limits. We emphasized on tailoring appropriate strategies with human-centric approaches. While our proposal did not win the hearts of the judges of the panel, our attempt strengthened our confidence in pursuing better policies for the people. We hope our stories in Dubai would inspire more students to participate in the contest.” by Lei Kai Ching Gabriel 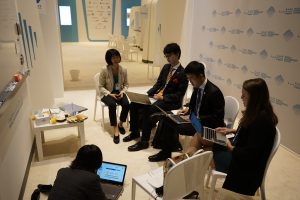 “It was very intensive but exciting. The World Government Summit provided a great opportunity to get lots of inspirations and work as a team for creative and feasible policy solutions to the problems in development. I am happy to have had great colleagues to make an effort towards tackling the given assignment, aspiring to win the Global Universities Challenge. Together with speeches made by global leaders and presentations by other universities, I had a strong sense that we shared a certain direction of solving global issues. Although it is not easy to solve all the problems we have at once, this encouraged me to pursue my career contributing to ‘shape the future’.” by Mari Kinoshita 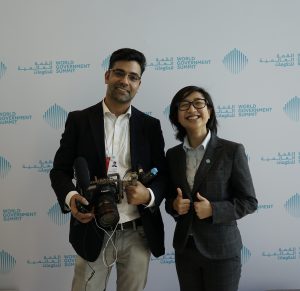 “My colleagues and I were chosen to participate in the World Government Summit’s Global Universities Challenge. With other 18 top universities from all over the world, we were challenged to provide an ingenious and creative solution to instill hope to a fictional failed state called Urmania. While difficult, I found the topic extremely enjoyable because it allowed me to remember some of the lessons I’ve learned and apply them to our proposal. It was also exhilarating to be surrounded by other academically inclined students from different disciplines and having the opportunity to mingle and discuss with them was indeed an experience. Besides the Global University Challenge I had the opportunity of a lifetime to listen and watch Nobel Peace laureates like one of the 2011 winners Leymah Gbowee and the sole 2016 winner who was also the former President of Colombia, Juan Manuel Santos. Other high-ranking officials and foreign dignitaries were also attending to represent their respective nations. The event was widely reported in UAE media with other respected international media coverage as well, but what I found most significant is how the media also valued students’ thoughts and opinions and shared it with viewers.” by Jiezel Nara 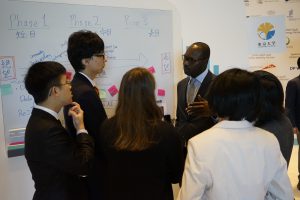 “Being able to represent the University of Tokyo for the Global Universities Challenge, during the World Government Summit 2019, held in Dubai, United Arab Emirates, has been an honor. Every day was a challenge for me, as it was not easy to create innovative solutions to recover a war-torn state in such a short period of time. We had a total of two days and a bit to discuss, research and craft a policy proposal. To be able to work under pressure was tough but a thrilling process. Overall, with great teamwork among our group, we were able to overcome the hurdles and present our idea in front of distinguished guests. I would like to thank my great teammates, and Prof. Nishizawa for the continuous support and commitment throughout the challenge. This Global Universities Challenge was a great opportunity to apply our knowledge acquired in a classroom to a real-world setting. I have realized once again that it is crucial to utilize your knowledge to its maximum, in order to help solve societal problems. Also, it was a rare opportunity to work on a policy proposal whilst constantly being interviewed by TV crews, and photographers simultaneously taking photos around you! In any case, it was exciting to be surrounded with other talented students from all over the world, as discussing with them brought me further motivation to better myself. Furthermore, hearing inspiring speeches from high profile individuals, such as Christine Lagarde and Paul Krugman, was one of the highlights of my experience at the World Government Summit. If I were given the opportunity to attend this event again, without hesitation, I would accept it!” by Shusei Yamamoto