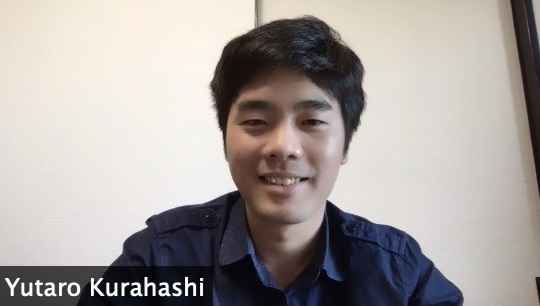 Without a doubt, the global pandemic of 2020 has brought about drastic changes to not only the university and how it operates, but to our graduate student lives as well. Campuses have shut down, various ceremonies have been cancelled, and we were all told to stay home. However, despite the sudden change to the new normal, the university staff, professors and students were all able to adapt promptly, and the S1S2 semester concluded in a reassuring success.

Conducting courses online has opened many opportunities, shedding light on the possibilities of overseas access to classes and flexibility of lecture choices. Students have the liberty to attend classes which may have originally been in a different campus, or attend 1st and 6th period classes which many usually shy away from due to its tough time allocation. The use of online platforms provided ease of access to such classes, and enriched our student life in an unexpected way.

For the 2020 S1S2 semester, I had the opportunity to work as a TA to assist Professor Akio Takahara for a course “Japan’s modernization experience and its ODA policy”. One of the exciting features of this class was the vast amount of guest lectures provided by respectable staff of Japan International Cooperation Agency (JICA), and most notably a lecture from Mr. Shinichi Kitaoka, the president of JICA. Each lecture style differed from lecturer to lecturer, and registered students were to give a class presentation at the end of the semester. 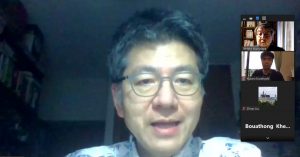 Though I had taken this class in the previous year and was familiar with the procedure, being a TA for a course conducted entirely online entailed new responsibilities. From weekly lecture rehearsals (making sure the slides can be shared) to on-the-spot technical problem solving, there were a number of different tasks that had to be managed, which otherwise may not have been necessary, had it been an in-person class. Given this lack of immediate face-to-face interaction, communication with both the lecturer and the class became that much more important. Housekeeping notices had to be thoroughly prepared beforehand, and messages had to be as clear as possible, because once the students had “left” the class session, there was no chance for any last-minute questions or announcements. In the worst case, if the host had ended the session by mistake, everyone would be unwillingly forced out of the class. Therefore, we did our best to solve this issue by setting me as the host of the online session (to make sure class did not end by accident), and kept the class active until the last student had willingly left. This way, students could ask questions after class, as if it were an in-class lecture, and the possibilities of missed announcements could be prevented. 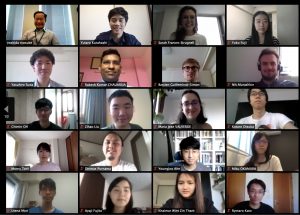 Along with new responsibilities, came many new issues that had to be taken into consideration. For example, many of the feedback I received from guest lecturers was about the difficulty of reading student responses and reactions. The only visible cues from students were the small window showing their faces, and without knowing how the students are responding to the lecture, it was hard to adjust the speed and difficulty of the course. Furthermore, encouraging student participation also became a little harder due to the somewhat awkward distance felt online. It seemed as though students found it hard to find the right timing to speak, in order to avoid overlapping with somebody else. This was especially prevalent in Q&A sessions, and led to a collective silence from time to time (this silence was usually broken after the first question). 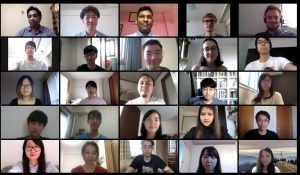 On the other hand, collecting class opinions were a lot easier to manage than in-person classes, thanks to options such as anonymous “polling” and “surveys” which automatically analyzed everyone’s answers. Students were also able to see the class’ answers and this helped smoothing class discussions. Class presentations were also a lot faster and easier to go through, as students simply had to share their screen from their laptops, instead of the usual hassle with USBs and HDMI connections. Additionally, sharing the recordings of each lecture also seemed to help students, as those attending from overseas were able to overcome time differences and others who may have had technical trouble during the lecture could catch up on where they had lost. Having the lectures recorded allowed all students to view the classes they missed, or review lectures they needed more focus on.

All in all, though there were many new challenges to overcome, in hindsight, working as an online TA was not too different from the usual in-class lectures. It just demands more digital literacy and an ever more frequent presence on Gmail. So, other than the usual video lags, voice lags and connection errors in general, I believe online courses really paved a way for our new student life. Flexibility of lecture choices brought about diversity in registered students, and just the sheer click of attending lectures made student life easier. Lectures and class discussions are always fun as usual, and after a semester worth of entirely online lectures, the “new normal” doesn’t feel so new anymore. 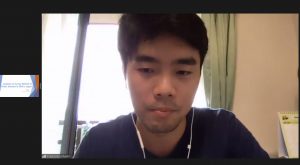