Recent studies and investigations have shown the growing cross-regional domestic market for trafficked children in China. This project analyzes the problem structure of Chinese domestic child trafficking and proposes a child-centered policy intervention for its prevention and the protection of its victims. Four main structural causes drive the supply and demand of trafficked children; namely, the one-child policy, traditional preference of male heirs, lack of public welfare, and the rural-urban regional economic disparity. We propose as one effective policy intervention the Integrated Family and Childcare Center (IFCC) which includes the functions of i) family capacity building as alternative institutions to trafficking brokers, ii) facilitation of safe and legal adoption, and iii) family-based care for non-adopted children. We contend that taking a child-centered approach to prevent trafficking and protect victims is needed to protect the basic rights and future of children, as well as to prevent the far-reaching socioeconomic consequences of child trafficking and exploitation in China. 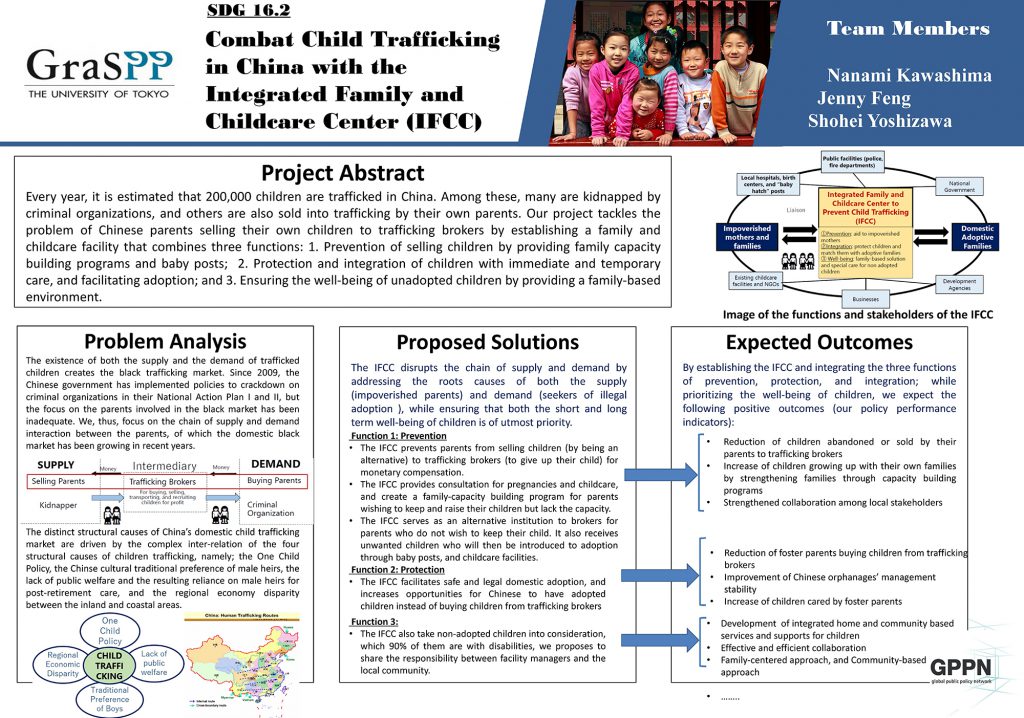 Yue Feng: I am a master student of public policy at the University of Tokyo, and recipient of the Mitsubishi Corporation Scholarship. I take an active part in extra-curricular activities. I am the section leader of the Jing Forum 2016, which holds political and economic discussions with representatives from Peking University and the University of Tokyo. In addition, I have internship experience with UNFPA, Barclays investment banking division, and the Citi Group investment banking division which has provided me with valuable experience in working with people from multi-cultural backgrounds, as well as finishing tasks well under tight deadlines in a stressful working environment.

Shohei Yoshizawa: I am a master student from the International Public Policy Program in the University of Tokyo. My interests are international political issues, conflict resolution and peacebuilding. I belong to the International Peacebuilding Association which is led by Dr. Hasegawa, who is the former Special Representative to the Secretary General of the UN. Additionally, I have real-world experiences working as a volunteer during the 42nd G7 Summit and in JCCP, the only Japanese NGO focusing on peacebuilding. I will also do an internship at the UN Human Rights Council in Geneva, and study at the Hertie School of Governance in Berlin as a double degree student this year.

Nanami Kawashima: I am a master’s student in public policy at the University of Tokyo and a recipient of the Global Leader for Social Design and Management Scholarship. I studied for one year at Sciences Po PSIA specializing in Sino-Japanese relations. I was on the student management team of various international student conferences, such as the Japan-China-Korea Youth Forum sponsored by the UN Association and the G8 Youth Summit. I am passionate about social welfare and labor policies, and have research internship experiences about female entrepreneurship, feminism movements in 20th century Asia, and women’s employment policies.