Innovative Approach to Policymaking in the Fight Against STDs was selected as one of the six GPPN finalists at the annual conference.

This application is an instrument to address STD/HIV problems. There are 4 main concepts: first, to use ICT (smartphones) to reach the target audience; second, to nudge users by collaborating with the private sector; third, to provide knowledge through casual chat; and fourth, to maintain the privacy of the users with an image of Otona-poi. The expected outcome is to raise awareness about sex, contraception and STD/HIVs. 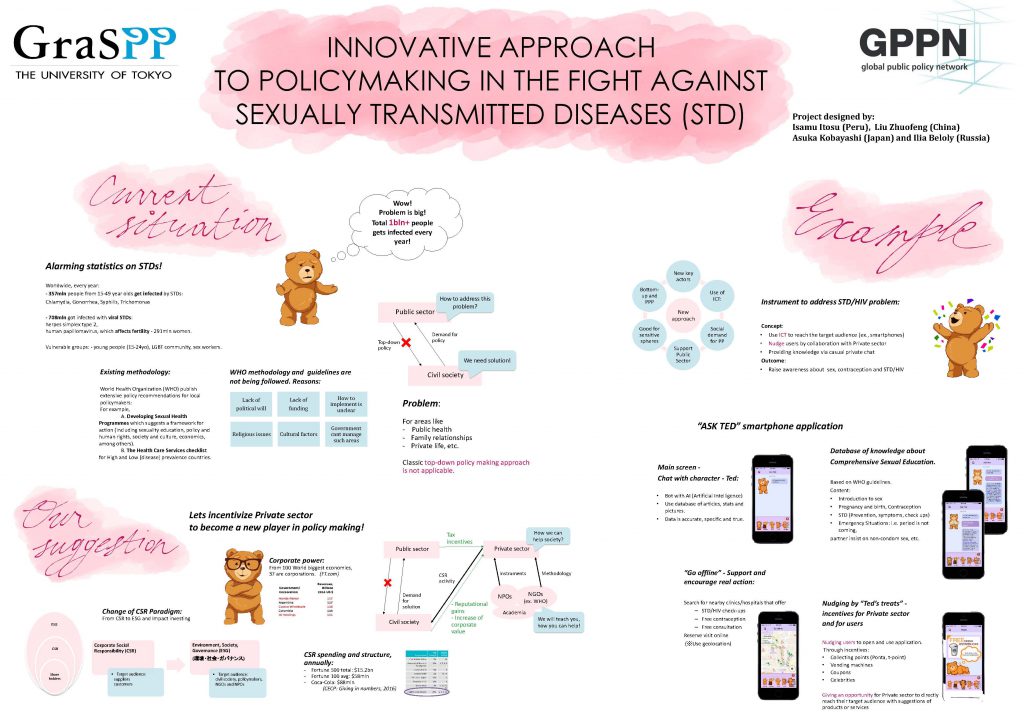 Isamu Itosu (Peru), received his Juris Doctor from Universidad del Pacífico in Lima, he is a Nippon Foundation scholar and is currently a first year MPP candidate at the University of Tokyo. As a lawyer, he worked as the Academic Assistant to the Dean at Universidad del Pacifico and as a Research Assistant on legal studies related to antidiscrimination law. Interested in International Public Law and Human Rights, he is eager to specialize on the design of public policies that can respond to the demands of a more diverse and inclusive society, through the interaction between Law, Public Policy and Public-Private Partnerships.

Ilia Beloly (Russia), obtained his undergraduate degree in Management. He has done a year abroad in Belgium and realized an internship in the EU administration. After college, he worked as a risk analyst in IB in Russia, but switched to quality management, due to his passion about Kaizen and Lean management philosophy. This is the reason why he entered to an automotive business and worked as a quality engineer. He is currently pursuing his master’s degree specializing in Energy Policy at The University of Tokyo. As a research topic he pursues to connect engineering with policy making.

Asuka Kobayashi (Japan), is currently pursuing her master’s degree in public policy, and did her undergraduate degree in Political Science and International Development, with a focus on education. She has worked in various educational development projects through her internships at UNESCO-IIEP, JICA and Human Rights Watch, as well as through her volunteering experiences at several NGOs in developing countries. She currently interns at the World Economic Forum to promote public-private partnerships on various agendas including education.

Liu Zhuofeng (China). A second-year student of GraSPP of the University of Tokyo. His studies at the University of Tokyo began in 2015, after receiving the Japan Human Resource Development Scholarship for Chinese Young Leaders. Before coming to Japan, he worked in the State Intellectual Property Office of the People’s Republic of China (SIPO). In SIPO he was in charge of the International IP data cooperation mainly in the JPO-KIPO-SIPO framework (patent offices from Japan, Korea and China) and IP5 framework (patent offices from EU, Japan, Korea, USA and China).