Our proposal is four-pronged. First, we recommend local governments to charge food waste collection by making households purchase designated rubbish bags for different categories of waste, including food waste and general combustible waste. To provide incentives for households to separate their food waste from general waste properly, bags for food waste are cheaper than the ones for general combustible waste. The separated food waste is to be disposed of at smart bins that we call “eco-bins”. Similarly to what is in place in certain districts in Seoul, households will need to scan their waste ID cards to open the bins to deposit their food waste. The “eco-bins” will then measure the weight and/or volume of each bag, and this data is stored. Second, this data will be linked with each household waste ID card. Third, we suggest local governments to implement a point system to incentivize households to separate and recycle their food waste. Last but not least, the food waste collected from the “eco-bins” is recycled into fertilizers, bio-gas, electricity and/or animal feed, depending on local conditions and demands. 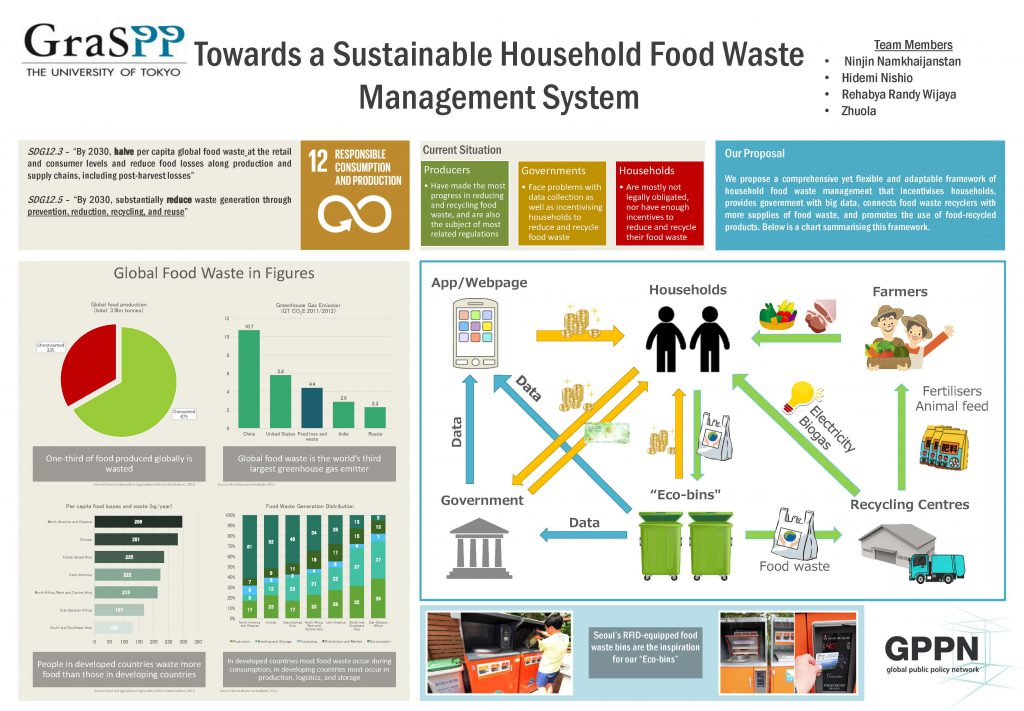 Ninjin Namkhaijantsan is a first-year Master’s student at the Graduate School of Public Policy, the University of Tokyo. Her current thesis mainly focuses on determining the factors of economic development in Mongolia, where she worked as an economist at the Monetary Policy Department at the Central Bank of Mongolia for eight years between 2008 and 2016. She attained her Bachelor’s degree in Economics from Shanghai University, China in 2008. She grew up in Ulaanbaatar, Mongolia.

Hidemi Nishio was born in Osaka and spent time there until high school. She entered Soka University of America in California, the United States, in 2012. Her major was social behavioral sciences. In 2014, she and three friends participated in the Yunus & Youth Social Business Design Competition held in Japan as a team and won the second prize out of nearly 50 teams. After finishing her undergraduate studies in 2016, Hidemi entered the University of Tokyo, where she is currently a first-year student at the Graduate School of Public Policy. She is interested in social security, especially poverty and the working environment in Japan.

Rehabya Randy (Aby) Wijaya is a Master of Public Policy candidate at the University of Tokyo, where he is also Teaching Assistant for two modules, “Security Studies” and “Transformation of Warfare and Technology”. His current studies are focused on political economy, political parties, and international relations. Prior to entering the University of Tokyo, Aby worked in a trading company in Japan. He graduated from Ritsumeikan Asia Pacific University in Japan in 2012, with a degree in Asia Pacific Studies. Aby was born in Jakarta, Indonesia, and spent time in New Zealand before moving to Japan in 2008.

Zhuola grew up in Inner Mongolia, China and graduated from Jiangxi University of Finance and Economics (JUFE) where she majored in international finance. During her undergraduate course, she participated in various voluntary activities and made contributions with other members. She came to Japan and started learning Japanese in 2013. Currently, she is the first-year student of Economic Policy at the Graduate School of Public Policy, the University of Tokyo. She is interested in development economics, especially the economy and environment in developing countries.