The COVID-19 pandemic has forced the cancellation of many events over the past year. In the wake of this, I am happy to say that, although it was conducted online, the 2021 GPPN Conference at the University of Tokyo was an overwhelming success and a great experience for my team and I. We had to work across three different countries and time zones during our months of preparation and research for our presentation. This necessitated many early mornings and long nights. When facing a deadline, I would be awake into the early hours working, then sleep for a few hours and wake up very early to reconvene with my team members online. 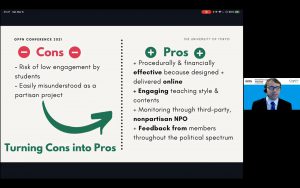 For us, the road to a thorough, practical policy proposal was long and sometimes uncertain. The theme of the conference, globalization, is indeed a very broad topic, which is both a blessing and a curse when you are trying to find one aspect of it to focus on. Our initial topic identified a concrete social problem, but the proposal on how to fix it was more nebulous. We all pursued various paths of research and spitballed ideas over a few months, as well as consulted with our advisors and past GPPN conference participants. At one point far into our research, we were mulling over the idea of scrapping all of our work and starting over with a new topic. There were certainly times that, in frustration, we would half-jokingly propose quitting the project altogether.

Thankfully, we did not have to give up on everything we had done; we were able to retool our proposal to focus on education and social empathy among teenagers. It was an idea that was not only specific, but that we had real solutions for, and an ample pool of prior research to draw upon. From that point on, our groupwork went very smoothly. We concentrated on streamlining our proposal and strengthening it with evidence. The next step involved condensing all of that information into 3- and 5-minute presentations that were concise but still showed why this idea was actually feasible. We also had meetings with the other conference groups at the University of Tokyo and were able to give and receive a plethora of useful feedback. 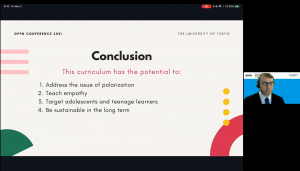 While I’m sure the online format of this year’s conference was quite different from the tangibility of previous years, I had a great time and learned a lot. It was very inspiring to see the policies that groups from other GPPN universities came up with. Even the differences in presentation styles and video presentations were illuminating. The conference offered a chance to network with other students from different parts of the world who are pursuing the same kind of studies that we are. It was an honor for our team to make it to the finals of the conference among such amazing talent. As I have said, there were many hardships along the way, but I feel very close with my team members now, and I look forward to what we will accomplish together in the future.