SIPA, its diversity on campus

One of the most important assets of SIPA is its diversity on campus. Students of MIA/MPA in 2016 represent 43 different countries, and international students account for 62 percent of the total. The average age is 26 with various unique experiences.

The students choose one concentration (major) from six different themes and one specialization (minor) from another six different topics. I chose Economic and Political Development and International Conflict Studies. These were great combination for me because I wanted to study how to prevent conflict and move forward from conflict to peace.

Here, I want to introduce two courses which I was impressed the most. Professor Elisabeth Lindenmayer teaches “The Security Council and Peacekeeping in Africa in the 21st Century.” The course consists of case studies of peacekeeping operations in Rwanda, Somalia, South Sudan, Court d’Ivoire and many other missions which Professor had involved. Most of the time was spent on discussions. It also had some guest lecturers. One day, for example, a former head of UNMISS shared her experience and view with us which told me the reality on the ground. I learned a lot about different opinions of major powers, troop contributing countries, host governments and the UN Secretariat through the guest lecturers.

Capstone is a group project most students do during the last 6 months of their student life. My project was about development policy of countries in Mekong region. We provided consulting to a NGO working on open data platform about SDGs and development. Based on the theory we learned during the first semester, we identified important stakeholders and conducted interviews to find out the unmet needs. Working closely with students with different backgrounds was another crucial purpose of Capstone. 7 members of my team were from 6 different countries. It was a great experience to work with them in Cambodia, Myanmar and the US.

There were a lot of good memories other than study such as hiking in the upper state of New York, ice skating in Bryant Park, running in the Central Park and going around in the city by bike. It was also a lot of fun to bring my friends to Japanese restaurants. One of the most interesting events during my stay in the US was, of course, the presidential election. Although the result of the election was unexpected for most of us, active election campaigns in the city and discussions with my friends were unforgettable experience.

Last but not least, I appreciate great support by many people including International Office at GraSPP, Professors and friends at GraSPP and SIPA, my parents, JASSO, and Okayama East Rotary Club and Rotary Foundation. Without those support, I couldn’t study abroad which is one of my goals in my life. The next step is to use this experience to contribute to the real world. I’ll do my best! 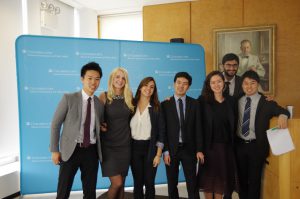 With the Capstone team after the final presentation 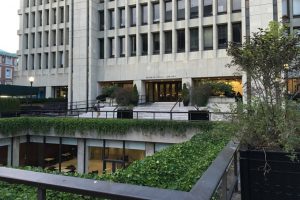 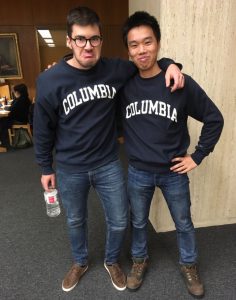 Oh! Okay, we both love Columbia!