Connecting the dots, living a life with no regrets

In the famous speech Steve Jobs delivered at Stanford University, there is the phrase “You can’t connect the dots looking forward; you can only connect them looking backward. So you have to trust that the dots will somehow connect in your future.” When I look back on myself, I’m certainly able to say that who I am today composed of what I experienced during the 2 and a half years in GraSPP and at the Australian National University (ANU), where I studied as a Double Degree student. And what I always ask myself when I work as an official of the Ibaraki Prefectural Government is, whether or not I have wasted these two and a half years, whether I am able to be engaged in tasks that only I can perform, and whether I am living my life with no regrets. 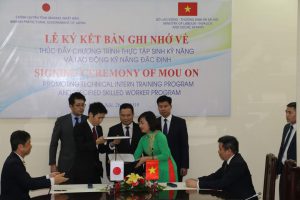 Signed a MOU with the central government of Vietnam. The man exchanging the memorandum is the author

Currently, I’m working on promotion of the acceptance of foreign labor into my prefecture in the Labor Affairs Division. Needless to say, Japanese industries have not been working without foreign workers. Ibaraki Prefecture is no exception. Its total population is around 2,900,000 and nearly 40,000 employees are from abroad. They support a wide range of industries such as agriculture and manufacturing, and this number of foreign workers has doubled to reach 40,000 within the past 10 years. As the Japanese Government created the new residential status of “Specified Skilled Workers” for foreigners in April 2019, it is accelerating the acceptance of foreign workers. At the same time, the Ibaraki Prefectural Government established the Ibaraki Foreign Worker Support Center ahead of the rest of the country, and also decided to strongly promote such acceptance.

I enrolled in GraSPP with 5 years working experience in the Ibaraki Prefectural Government. After graduating from GraSPP, I vaguely came to feel that I would like to engage in internationally related affairs. Then, after I applied via an in-house recruitment system (some divisions recruit staff who hope to be assigned in the section), I came to the current Labor Affairs Division in the first year our government started to promote the acceptance of foreign labor. The reason why I chose this division was that I could communicate with foreigners more comfortably than other officials since I had studied with lots of foreign classmates and discussed the differences between public administration systems, politics, and culture in our home countries. In addition, I thought I could make use of my English skills gained at ANU. I believed that this division had tasks which only I could achieve in the government. 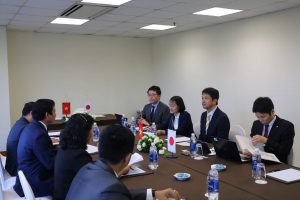 Concluded a MOU with the Vietnamese local government. The author is on the far right, and on the left is the governor of Ibaraki Prefecture, Oigawa

My responsibilities for promoting acceptance of foreign labor are much more challenging than I expected. At first, I needed to negotiate with central and local governments abroad, education organizations, and foreign embassies in Japan. This was because we have to find reliable counterparts, and conclude Memorandums of Understanding (MOU), in order for companies in Ibaraki to accept skilled foreigners with Japanese language ability through proper channels. It is not uncommon for malicious brokers, which do business placing foreign workers with companies, offer disguised resumes of foreign candidates or introduce workers who do not match the required residential status in Japan.

Another issue is whether the foreign workers choose Ibaraki from 47 prefectures in Japan, even if our government hopes to accept foreign workers. We have to be ahead of other local governments by appealing to all our advantages including working and living environments such as salaries, treatment, and support for foreign nationals. Ibaraki targets 4 countries, including Vietnam and Indonesia, and I have taken the responsibilities of all the negotiation upon myself.

To find reliable counterparts, communicating with foreign central governments through foreign embassies in Japan is a plausible approach, so I asked classmates at GraSPP and ANU for help. These classmates were studying how to make public policies, so many of my classmates were sent from central ministries from their home countries. I requested my friends coming from ministries such as Finance and Internal Affairs to introduce officials working at embassies in Japan. Through this channel, I approached their national government. Though I omit detailed negotiation processes, I was able to successfully conclude MOUs with several countries, and start concrete projects.

News for the conclusion of MOUs with central and local governments in Vietnam
https://www.pref.ibaraki.jp/shokorodo/rosei/rodo/gaikokujin/mou/vietnam.html

News for the conclusion of an MOU with a university in Indonesia
https://www.pref.ibaraki.jp/shokorodo/rosei/rodo/gaikokujin/indonesiauniversity.html 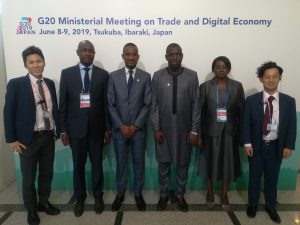 When I look back, I had never imagined the current situation, but I believe that it is the result of connecting what I did and learned in my periods as a graduate student. Before enrolling at GraSPP, I had no idea about internationally related work as I do now. If I had not studied at ANU and experienced a circumstance where I was the only Japanese in my class, I may not have wanted to engage in promoting acceptance of foreign labor. In addition, experience in having studied crazily until 2 to 3 am every day at ANU library with no days off, and in having passed through classes without failing, though that was really difficult for me as my English was the worst in the class, made me tough. All of these challenges helped me a lot to survive and reap a harvest in negotiation with foreign governments, even under difficult situations where I cannot rely on anyone because these negotiations are truly new to almost all prefectures in Japan, not only to my prefecture.

Before I graduated from the GraSPP, some of my classmates asked me if I could make use of what I gained in the graduate schools after restarting my job at the prefectural government. Other friends kindly offered to refer their companies to me. However, I wanted to contribute to our society by doing something that only I can do, so I decided to continue working for my prefectural government. Trying to justify my determination and feel no regrets about my decision seems to be like a kind of “curse” to me. Achieving something in international fields requires trying all the things I can come up with, and if I can feel even a bit of hope from one of these attempts, I cannot help doing it.

There are divisions in my government which are related to China such as exports, tapping new airlines, and international tourism, so I have started studying Chinese in order to continue engaging internationally even after moving to different departments. In addition, to not forget my English skills, I have talked with my Australian friend every two weeks online. Whenever I look back, I would like to say that I have been spending my life with no regrets, and successfully connected all the challenges, experience, and life of 2 and a half years in GraSPP and ANU.

(This English version was grammatically checked by my dear friend, Alex Pan.)