― I heard you have been working since April? 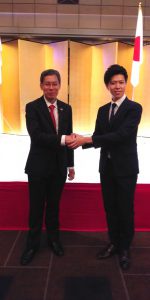 That’s right. I have become what they call an “adult student” (laughs). I have always been interested in academia, and this is what got me thinking about continuing my studies at graduate school. I was a law student, and the period during my third and fourth undergraduate years when I was wondering about what topic to work on for my masters was a time when the issue of the TPP came up frequently on television and the net. Those news reports and other coverage fed my steadily growing interest in the agricultural economy, leading to my enrolling in the Graduate School of Agricultural and Life Sciences. My supervisor at that time, as well as being an academic, also served on government-related committees, something that struck me as an interesting path to follow. Inspired in part by this teacher, I decided I would like to keep studying with a focus on the intersection of agriculture with politics and policy. That was what led me to apply to GraSPP.
After starting at GraSPP, in addition to my studies, I also devoted myself to embassy volunteer work through the student union and other extracurricular activities. Although I still had concerns of my own, such as my career path and other aspects of my future, my way
of thinking about it was that regional economies will not do well if primary industry fails to prosper, and that without prosperous regional economies, the economy of Japan as a whole will fail to thrive. This is what led me toward working in the field of agriculture, forestry and fisheries. I was fortunate to get an agreement allowing me to commence work while still at university, I so started at my job from April of this year. I inevitably encounter the same terms being used at my workplace in the course of my duties as I hear in my lessons at GraSPP, something that makes me aware of the overlap between study and work. Examples include open

― Is there anything special you do to combine work and study?
Not really. I guess that is because I like school (laughs). I always study at the university because I only get distracted by other things if I try to study at home. So whenever I have the time, the university is where I am usually found, especially on weekends. When work finishes early, I drop off my things at home and go straight to the university to keep studying. Of course, I take care not to let this impact my work on the day after. I’m someone who has always liked university. Friends often ask whether trying to do two things at once is difficult, but in fact, because I like university so much, coming here is actually a way to relieve stress. For me, school is the place where I feel most relaxed. That’s why I tend to think of myself as a “university hikikomori” (laughs). 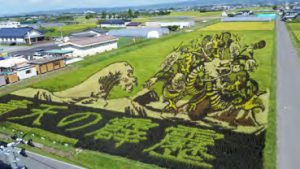 Personally, I would like to continue both with my work and my study at the university. If possible, I would love to go on and do a doctorate. Moreover, rather than just deskbound study, I would like to get more people to take an interest in Japan and in agriculture and other forms of primary industry. My hope is to get involved in extracurricular activities that convey the positive aspects of Japan, such as our cuisine which has been growing in popularity overseas in recent times.