― Why did you choose to study at GraSPP?
I came to Japan from Uzbekistan in 2012. I studied law at Nagoya University as an undergraduate for four years and then went on to graduate school. I chose the politics of Uzbekistan as the topic of my undergraduate dissertation and spent two years researching the politics of Kazakhstan and the oil problem for my master’s degree. I am currently studying about Kazakhstan and Russia, but I hope to go back to research the politics of Uzbekistan in the future.
Having spent six years in Nagoya, when I consulted my professor his advice to me was, “You won’t come up with any fresh ideas if you stay in the same place. You should try somewhere else.” As a result, I decided on the University of Tokyo and GraSPP, seeing it as a challenge.
O 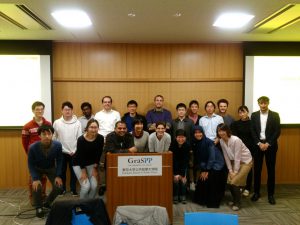 ne of the good things about GraSPP is its interdisciplinary approach that enables students to study both theory and practice. Because I wanted to learn how I could put the things I had studied at a theoretical level into practice, I wanted to go somewhere where many of the teachers had experience from outside academia.
Coming to GraSPP, I also decided to take on the Global Leader Program for Social Design and Management (GSDM). I am fascinated by the variety of ideas that come from interdisciplinary research in which students from faculties such as engineering and medicine come together with others such as myself who study economics and politics to address a particular problem from a diverse range of perspectives.

― Your Japanese is very good.
Thank you. I decided when I came to Tokyo that I had to get more serious about studying Japanese properly. I joined the GSDM Book Club where we chose a different book each month to read and discuss. For example, I have read “Kokoro” and “And Then” by Natsume Soseki and “No Longer Human” by Dazai Osamu, all in English. Although I read them with the idea of learning about Japanese society and culture, works of literature are difficult to absorb. While I read lots of academic texts for my studies, I’m afraid I don’t read much fiction, so the Book Club remedied that. Also, realizing that I hadn’t watched very many Japanese movies in the past, I decided to change that as well and recently atched Shoplifters. I enjoyed it a lot. While I have spent time with Japanese people in the past to a certain extent, they were people from articular walks of life such as my fellow students or workers at a part time job, and this has left me with my own personal impression of what Japanese people are like. So, when I watched Shoplifters, it left me feeling that the Japan and Japanese that I know are not the full story. In this sense, too, I feel I have gradually been developing a better understanding lately. I found Shoplifters to be fascinating in this regard as well. As I hope to continue living in Japan in the future, I want to learn more about the Japanese people, including the society, language, and way of thinking.

― What is your dream for the future?
I want to continue my research and become a scholar who understands everything right down to the roots of post Soviet societies. The number of people from Uzbekistan studying in Japan has increased recently, with about 80% staying on to work at Japanese companies after graduation for reasons such as wanting to provide economic support for their families. What I personally believe Uzbekistan society really needs, however, are researchers and scholars. As I am unsure of whether I will be able to make a living as a researcher once the three years of study it takes to get my doctorate are over, being realistic about it I must accept that following the path of research will be difficult. But when I think about what will benefit Uzbekistan as a nation and as a society, someone has to take up the role of scholar. As my dream is to become a researcher and a scholar who can be of use to my country and society, I will do my utmost to achieve that.