Banking on a golden opportunity to help her country’s economy

Hailing from Indonesia, central bank official Wahyunindia Rahman is taking a break from her work to hone her expertise in economic policy, finance and development at the Graduate School of Public Policy (GraSPP). To wrap up her two years of study, the mother of two is now working on her thesis to develop a statistical model, which she hopes will be used for implementing effective monetary policy in her home country.

Rahman decided to apply for GraSPP’s Master of Public Policy, International Program, after realizing the need to gain deeper and concrete knowledge to fully grasp her work at Bank Indonesia, the Southeast Asian country’s central bank.

It was a job she got after feeling something was missing working at an information technology company’s accounting department. Having majored in accounting for her undergraduate degree at Padjadjaran University, in Bandung, West Java province, it was a natural path for her to get the accounting job. Thinking that she may be able to contribute something to society if she works for the central bank, which serves as the country’s monetary authority tasked with stabilizing the currency to sustain economic growth, Rahman applied and got a job there after a monthslong selection process.

During her six years at the central bank, Rahman worked in a section at its Jakarta headquarters tasked with maintaining Indonesia’s financial stability, and also at its representative office in Banten province where her work included increasing the number of people who have access to the financial system. The work was interesting, but the more she got interested in her job, the more she felt her lack of profound knowledge in economics, having only studied the subject at the introductory level during her undergraduate years. Although the central bank provided annual training to help conduct her job, she wanted to gain more in-depth understanding of her work.

“I decided to pursue a master’s degree in economic policy to deepen my knowledge, especially in economics and finance,” Rahman said, adding, “Hopefully, I will be able to contribute more by gaining the knowledge.”

Partly due to the fond memories of Japan from a short trip she took during her undergraduate years, Rahman searched the web for a suitable master’s degree program in the country and came across GraSPP’s international program in English.

“It offers diverse programs from theoretical to case studies. We can also take programs from other graduate schools such as the Graduate School of Economics. So, I thought if I join GraSPP, I would be able to combine theoretical studies (in economics) and implementation (of public policy). That’s why I chose GraSPP and applied and luckily, I got accepted,” Rahman explained.

Deepening her knowledge at GraSPP 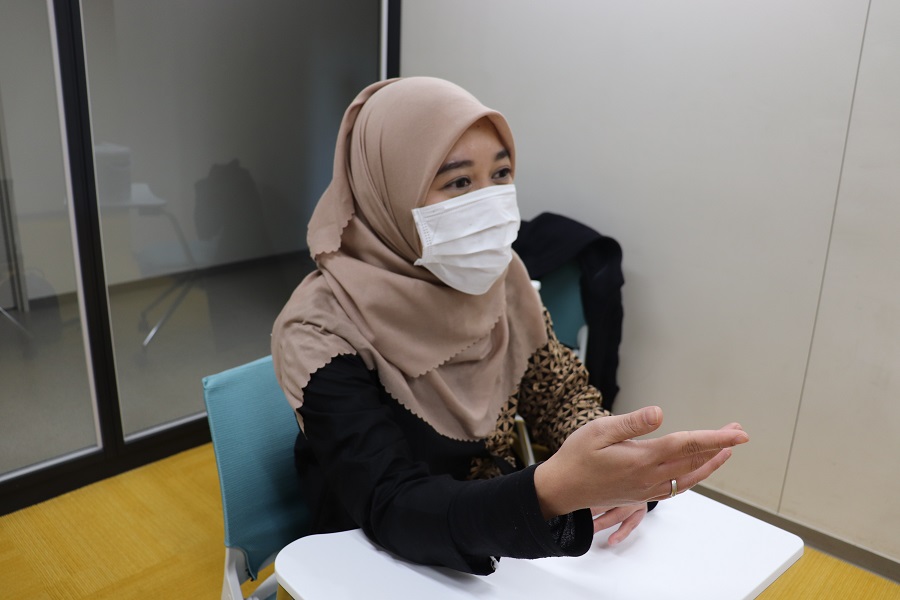 Wahyunindia Rahman explains the reasons why she came to Japan to study at the Graduate School of Public Policy during an interview in January 2021.

After obtaining a scholarship from the Asian Development Bank, her employer sent her to Japan to pursue a master’s degree. She arrived in July 2019 together with her two small children and husband.

The first year at GraSPP consisted of taking classes, which ranged from microeconomics and statistical methods to global financial policymaking and law. All the classes switched to online in April 2020 due to the coronavirus pandemic. Aside from the classes, professors have been scheduling online office hours over Zoom, where students can pop in to have one-on-one discussions to talk about their research or other concerns. Although Rahman misses in-person interactions, she says overall, everything has been going well.

Now in her second year of the master’s program, Rahman is working on her thesis under the supervision of Associate Professor Taisuke Nakata. Her thesis is about developing a financial macro-econometric model for Indonesia, which is a statistical model used for simulating and forecasting economic conditions. The model, for example, can be used for predicting the impact of raising the interest rate, such as whether it would increase consumption or not. Rahman explains that if she can successfully develop the model, it may be used for the central bank to implement an effective monetary policy.

“It’s still an early stage. … But I’m calling the model I’m working on ‘macro-econometrics version 1.0’ because it’s something to be developed and to be improved,” Rahman said. “The idea is, I wanted to make something useful for my work. So, hopefully, it can be used for simulating a policy we want to issue.”

Quality time with her children

As a mother of two daughters, aged 3 and 5, juggling studies and child rearing can get tough. But thanks to her supportive husband, with whom she shares the housework, and a nursery school, Rahman says she has been able to balance the two.

“They are at the nursery school during the daytime, so I can focus on my studies between 9 a.m. and 5 p.m. Even when it’s not enough, I can continue to study after my children fall asleep,” she explained. “Of course, I sometimes feel tired because I’m human. But I’m lucky to get this opportunity to pursue the master’s degree. I don’t think I can waste this golden opportunity.”

Given that she can spend only a little time with her children on weekdays, Rahman makes sure to devote her time for them on weekends. She currently lives in the Japan Student Services Organization’s residence hall in Tokyo’s Odaiba area. She says the waterfront district is a great place to be in a time of pandemic when people are advised not to travel because there are many spots nearby where families with small children can enjoy such as parks and museums.

“Odaiba has many places to visit, such as museums. My daughters love Miraikan (the National Museum of Emerging Science and Innovation). We also went to the Museum of Maritime Science,” Rahman noted.

After graduating from GraSPP in autumn 2021, Rahman is set to head back to Indonesia and resume her work at Bank Indonesia, armed with her new knowledge. Although she doesn’t know which section she will be assigned to, she hopes it would be the financial system department.

“I believe learning is a lifelong process. And, so far, over the one and a half years here, I’ve learned a lot. … Now, I have a better understanding of the subjects I’ve studied. Besides that, living in Japan gave me insight that I can take home,” Rahman said. “Hopefully, with all the knowledge and experiences I got here, I can contribute more to Bank Indonesia and the Indonesian economy.”