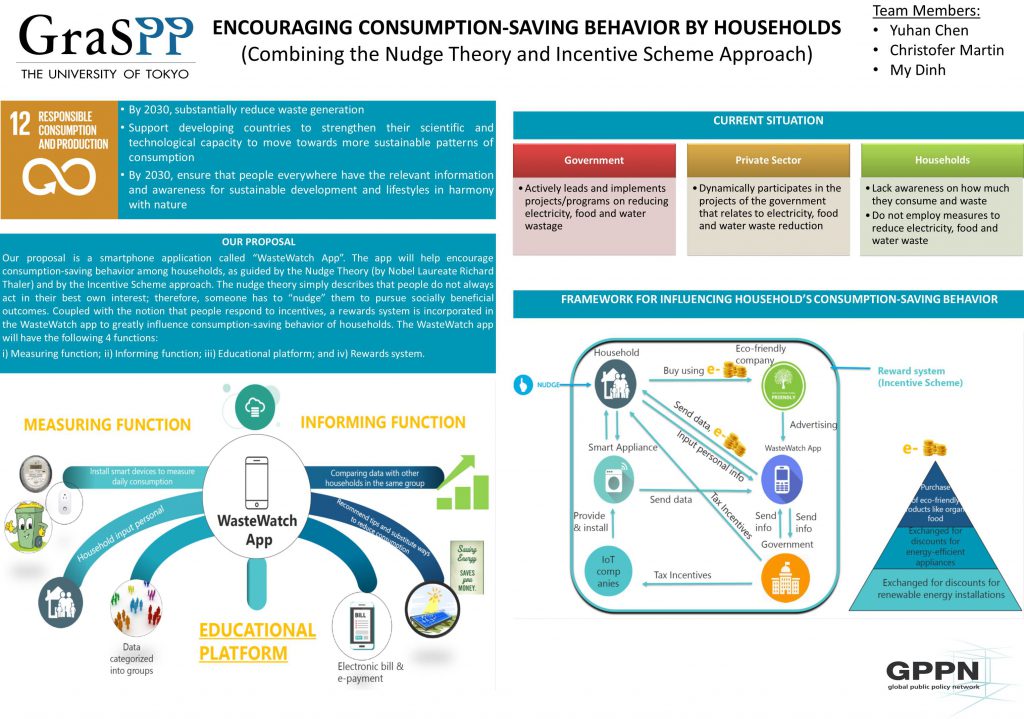 Our proposed application is called Setsujin (節人) App, which is a made-up word consisting of two Chinese characters that means “save” and “people” separately, meaning “people who save” by combining the two words. The Setsujin App is a smartphone application that helps people to reduce electricity, water and food wastage and to raise households’ awareness to be a Setsujin (responsible consumer). Our product tries to address SDG12 targets by providing households’ daily consumption information on water, electricity and food compared to the average level of consumption of their neighborhood, based on the Nudge Theory by Nobel Laureate Richard Thaler, and introduce a virtual currency called S-coins or Setsujin-coins as Incentive Scheme. To implement this project, partnerships will be built with the government, IoT companies, renewable energy companies and etc. to build a circle that would encourage responsible consumption-behavior among households.

Christofer Martin is a Master of Public Policy (International Program) student at the Graduate School of Public Policy (GraSPP), The University of Tokyo (UTokyo) under the Joint Japan/World Bank Graduate Scholarship Program (JJ/WBGSP). Prior to pursuing his masters degree at UTokyo, he worked as a Bank Officer at the Department of Economic Research at the Central Bank of the Philippines from 2013 to 2016. His research interests are in the field of financial economics and monetary policy. He obtained his Bachelor’s degree in Business Economics from the University of the Philippines in 2010.

Dinh Nguyen Tra My is a Master of Public Policy (International Program) student at the Graduate School of Public Policy (GraSPP), The University of Tokyo (UTokyo). Before joining GraSPP, she worked for Baker McKenzie (Vietnam) Ltd., Hanoi Branch as a legal assistant for almost 1 year. She got her Bachelor’s degree in International Law at the Diplomatic Academy of Vietnam in 2015.

Yuhan Chen is a second-year student of GraSPP of University of Tokyo(Economic Policy). He obtained his undergraduate degree in Software Engineering at Nanjing University of Science & Technology in China in 2013. To broaden his horizons, he came to Japan in 2014 to study Japanese and pursue his master degree of public policy, during which he developed interests of combining economic knowledge with information technology to tackle social issues.