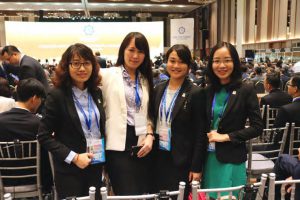 ― How has life been since starting at the University of Tokyo as a graduate school student?
It is very enjoyable and fulfilling. Although I joined the student union duringmy first year, GraSPP has much more interaction between students and more external teachers. I was able to meet more people and I suddenly found there were a lot more things I wanted to do. I played volleyball through the athletics club as an undergraduate and spent four years immersed in my studies and that sport, so it feels like I’m only now getting started at university (laughs). Last year, I took full advantage of the programs offered to me by GraSPP. The first of these was an educational tour visiting different parts of the country put on by the Japan Study Trip program in which I accompanied 30 students from the Lee Kuan Yew School of Public Policy. Through good fortune, I was able to participate despite having yet to start at GraSPP at the time of the trip, and I found it an eye-opening experience. Being more used to talking with people of my own age group, listening to what people from a wide variety of different backgrounds had to say made a big impact on me. Later on, in November, I also attended an APEC youth conference that was held in Vietnam. This was a meeting of youth (students) from different countries held two days before the main APEC conference. With the preparatory work having been done, I found the work on collating
views contributed by delegates from different countries into a proposal document at the event itself to be very stimulating. Being able to watch the addresses from the various world leaders attending APEC was also a valuable experience.
Of all the things I was involved in last year, however, one that left a particularly deep impression on me was Aomori, where I went as part of the field-study-based collaborative public policy program that was launched by the University of Tokyo last year. After conducting about four on-site surveys in Towada, I have become an Aomori obsessive.

― Why did you choose Aomori and Towada as places to conduct a survey? 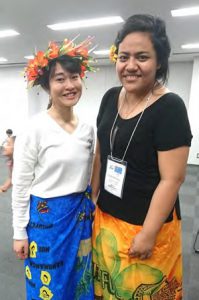 I attended presentations by the participating local government agencies as part of the process of deciding on a location. I was won over by the one given on Towada by a person from the Aomori prefectural government which I found to be particularly powerful. The Towada representative got around a lot and was well known in the area, introducing me to lots of people in Towada. I also appreciated the warm welcome I received from the townspeople. Another reason for my being so taken with the place was that doing fieldwork in Towada led to my getting to know Hatanaka-san, who works on promoting the town by running seminars on Towada Barayaki (pan-broiled beef belly and onion), a popular local cuisine. Watching the video about its winning the 2014 B-1 Grand Prix (a competition for
inexpensive local cuisine) that also showed assistance work in areas affected by the earthquake really brought home for me what it means to be involved in regional reconstruction. Last year also saw the staging of a festival of local cuisine at Shenyang in China during
October that was attended by 10 or so organizations from Japan, it being the 45th anniversary of the normalization of diplomatic relations between Japan and China. As the Barayaki Seminar delegation to the Shenyang festival included local junior high school students, I went along with the job of looking after eight young people. It was my first ever visit to China and I had a wonderful time.
Having met so many people over the last year who I would like to remain in contact with, including Hatanaka-san and the people from the prefectur a l government, this is something I expect to cherish for years to come.