Student Interview No. 33(from Newsletter No. 57)

― Tell us about how you came to study at GraSPP
After graduating from a university in the Philippines, I spent one year working at a private power generation company and two years at the National Economic and Development Authority (NEDA) before coming to Japan in August 2018. What first sparked my interest in pursuing higher studies was one of my professors during my undergraduate degree who had studied in Japan. He shared how his experience studying in Japan has changed his perspective and contributed to his personal growth and development. Actually, I had wanted to come to Japan straight after graduating, but unfortunately, that didn’t work out. So, I decided to build upon my experience first and worked in the government. I have attended the 2017 information session conducted by Nishizawa-Sensei in Manila, and I instantly became interested in the program as it offers an opportunity to learn law, politics, and economics at the same time. This multidisciplinary approach in formulating public policies and addressing different challenges is much needed in today’s world. Fortunately, one of the people I worked with was a GraSPP alumnus and has provided me good feedback and guidance.

―How are you finding GraSPP and living in Japan?
My main interests are energy policies as well as policy processes and developments in Japan, and I am happy that GraSPP offers various English courses in those areas. With classmates coming from different countries and multiple backgrounds, GraSPP has provided an exceptional learning environment that helped me expand my current knowledge and widened my perspective on several issues. In terms of living in Japan, I love Japanese food and really enjoy my current life here. The people are very kind, courteous, friendly, and very helpful. Even those who cannot speak in English go the extra mile to help me by using translation software to communicate. This makes it a very good country for overseas students coming to study. I also like how Japan has four seasons, as opposed to the Philippines, where it is always hot. Fall is my favorite, as everything seems so vibrant and lively. So far, I have taken a trip to Hokkaido, Tochigi, Karuizawa, among others, and had wonderful experiences in each area. I also hope to visit the Kansai and Chugoku Regions before I graduate.

― So you have been keeping busy, both at GraSPP and farther afield? 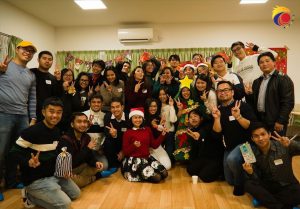 Having students from so many different countries and regions at GraSPP gives you a deep appreciation for diversity and makes it a great environment for expanding your horizons. I have joined the student union at GraSPP and have been an active participant in the hope of engaging with the other Japanese and overseas students. Outside GraSPP, I am the Vice-President for Student Welfare of the Association of Filipino Students in Japan (AFSJ), which is made up mostly of Filipino students studying at various universities around Tokyo. As part of AFSJ, I am active in supporting students who are struggling with an unfamiliar overseas lifestyle by organizing events and activities that gather Filipino students such as Welcome and Christmas Parties, Mental Health Seminar, Sports Festival among others. I am also an active member of the ASEAN Youth Network in Japan.

― What path do you intend to follow after you graduate from GraSPP?
I intend to return to the Philippines after graduation to work for four years at NEDA. However, I also have a desire to teach and to support students and learn along with them. So, I would like to return to the academic world at some point. Beyond that, although it will take a long time, I would like to get a doctorate as well. I am currently acting as a TA for three classes at GraSPP, and I see this as a good practice for teaching in the future. Coming to Japan has changed my life enormously. It would have been hard to gain experience like this had I stayed in the Philippines, and that is why I want to expand my network while I am here in Japan. And, since I get so much enjoyment and happiness from working with and for other people, I want to pay it forward by supporting other overseas students and inspire individuals to go beyond their comfort zones and continuously challenge their selves.