As a part of MPP/IP and Campus Asia Family

I would like to share why I applied to GraSPP and what I learned and felt after enrolling in GraSPP as a Japanese student belongs to MPP/IP.

Firstly, when I graduated from undergraduate school, I wanted to work in the public sector in the future. Therefore, I was attracted to GraSPP, which offers a comprehensive study of law, economics, politics, and public policy. After entering the school, I took classes related to development economics and diplomacy. I took a seminar on diplomacy with a former Vice Minister of the Ministry of Foreign Affairs. In other classes, I was able to take classes with professors who were well known in academia and practitioners who have work experience in different ministries and international organizations. I was very impressed to hear about actual negotiations in the real world in addition to theory. 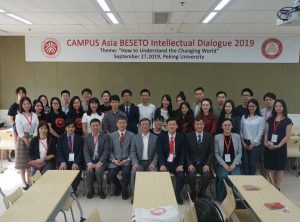 Secondly, I wanted to participate in the Campus Asia Program. I was part of Japan, China, ROK youth forum organized by the United Nations Association of China, Japan, and Korea during my senior year of undergraduate school. Due to my background living in China when I was young, I struggled with my identity as a representative of Japan in discussing global issues. It was my first time returning to China after about ten years, and I was surprised by the country’s remarkable development, which was completely different from what I had known about China. During the discussion with Chinese and Korean students, I felt my lack of understanding and knowledge of East Asia. Therefore, I decided to apply for the Campus Asia Program, which allowed me to study at three top graduate schools in Japan, China, and Korea. Through studying and living in all three countries, I could deepen my knowledge and gain different perspectives by understanding culture and history. 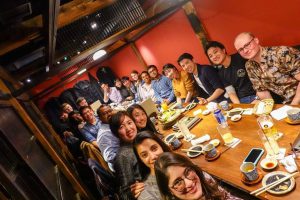 Next, I would like to share why I chose MPP/IP among the various courses offered at GraSPP. I originally planned to study at a graduate school in the UK during my senior year of undergraduate school. However, in order to apply to the Campus Asia program, I deferred my offer of the graduate school in the UK that I initially intended to go and instead applied to GraSPP. Since I originally decided to apply to a master’s degree program taught in English, I was looking for a program that would enable me to study in English while staying in Japan. MPP/IP was what I wanted to study, and it was the best program I could find. The learning environment was even better than I had imagined. It was literally “studying abroad in Japan.” In MPP/IP, there are many students who have work experience from different countries and sectors and students who have received government scholarships to study abroad. It is a great honor to study with many talented colleagues and seniors in life every day. However, I realized that I had to study even harder than others, especially to learn an entirely new field of study that I have never learned before. I am very grateful to my seniors in the same program who helped me through a hard time. Although we are all very diverse in age, background, and experience, I feel that the best thing about MPP/IP is that we all get along, discuss constructively, and help each other rather than compete. And I think school’s atmosphere is excellent because the students, the professors, and staff always help us when we ask for advice.

Since I had heard that there are many students with work experience before I enrolled in the school, I took a gap year to do a half-year internship in Cambodia in city development and education to find out how to apply theory to reality. If there is anything that I can advise for students who have been accepted already, I recommend studying mathematics and economics before entering GraSPP. Of course, it is unnecessary to study in advance, but I recommend studying the basic parts as preparation if you have never studied the subject before.

I hope you will be interested in the School of Public Policy and MPP/IP and find your interests and careers through studying at GraSPP.