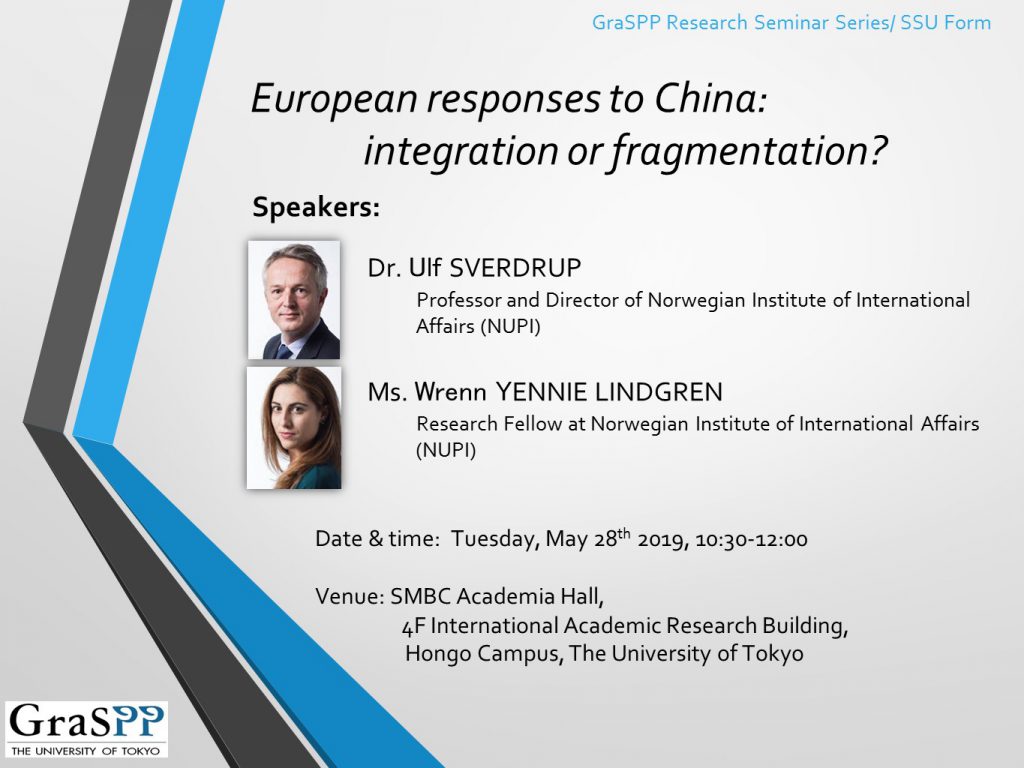 Abstract:
While the increasingly tense relationship between the US and China captures most of the attention in international affairs today, there are also considerable dynamics in the relationship between Europe and various Asian partners. Recently, Japan has further intensified its relationship with the EU, establishing both an Economic Partnership Agreement and a Strategic Partnership Agreement, and Prime Minister Abe visited the EU in April. A key issue for Europe is how Europeans can best deal with China. Is it through the development of a more united and integrated policy, or is it through more fragmented policies shaped by the different interests of the various member states? A better understanding of this issue will help us shed light on the nature of the EU as a global actor and the future of multilateralism. In this talk, Ulf Sverdrup and Wrenn Yennie Lindgren will discuss some of the recent developments in Europe’s approach to China, including attempts to create more unified policies, as expressed by the 2019 EU-China Strategic Outlook. In their presentation they will also shed light on issues related to Sino-Nordic relations.

Speakers’ Bio:
Ulf SVERDRUP is the Director of the Norwegian Institute of International Affairs (NUPI). He holds a doctoral degree in Political Science from the University of Oslo. Before taking up the position at NUPI, he was a professor at the Norwegian Business School BI, and a research professor at ARENA, Centre for European Studies, at the University of Oslo. He earned his Masters degree at the University of Bergen. Sverdrup has published extensively on various topics in international politics, with a particular emphasis on European politics, European integration and Norwegian foreign policy. He has been a Jean Monnet fellow at the European University Institute (Italy), a Visiting scholar at the Mannheimer Zentrum fur Europaische Sozialforschung (Germany), and he has also worked as senior advisor in the Norwegian Ministry of Foreign Affairs. He is a regal contributor to a leading Norwegian business newspaper, Dagens Naringsliv.

Wrenn YENNIE LINDGREN is a Research Fellow at the Norwegian Institute of International Affairs (NUPI), an Associate Fellow at the Swedish Institute of International Affairs (UI), a 2018 Japan Foundation Fellow at Meiji University and a visiting researcher at Waseda University. Her research focuses on the politics and foreign policy of Japan, international relations in East Asia, East Asian states’ interests in the Arctic, and traditional and non-traditional security issues in the Asia-Pacific region. Yennie Lindgren has prior work experience from the Centre for Asian Security Studies at the Norwegian Institute of Defense Studies (IFS), United Nations University in Tokyo, the State Department at U.S. Embassy in Japan and the James Martin Center for Nonproliferation Studies in Monterey, CA. Her most recent work has been published in Asian Politics & Policy, The Hague Journal of Diplomacy, the Journal of Eurasian Studies and Asian Perspective.