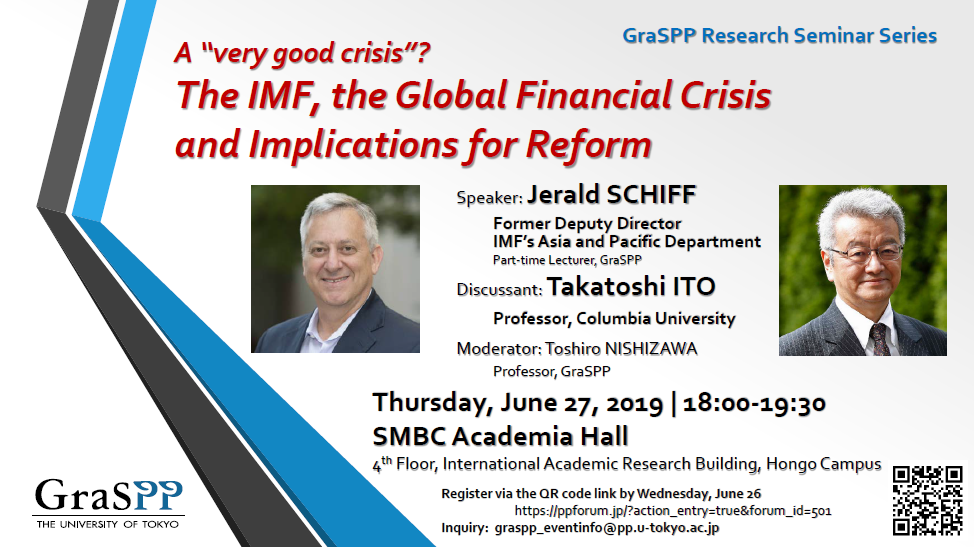 The ongoing G-20 round, led by Japan, has among its areas of focus, global economic governance and the international financial architecture. In this context, the eﬀectiveness of international financial institutions during the Global Financial Crisis (GFC) of the last decade can provide insights into the challenges of preventing or dealing with future crises, and point the way to needed reforms.

The IMF exhibited both strengths and weaknesses during the GFC. It is seen by many as having responded quickly and flexibly to the crisis, including by obtaining large additional resources from the global community, developing new and streamlined lending facilities, and enhancing working relationships with other international organizations, including the FSB and G-20. The sharp rise in lending activities—following a period in which IMF relevance was questioned and staﬀ reduced—led some to conclude that the institution indeed had a “very good crisis.” Nevertheless, there were significant missteps. The likelihood, scope and virulence of a potential financial crisis was severely underestimated at the start. Moreover, several large programs, most notably for Greece, ran into serious problems.

How did these successes and failures emerge from the internal dynamics and political cross-currents faced by the institution? What should be done diﬀerently going forward? How can the IMF improve its ability to anticipate crises and deliver timely and eﬀective assistance in the face of such crises? What can other institutions, especially those working in global policy, learn from this experience?

Mr. Jerald Schiff will draw on his experience as a senior IMF staﬀ member, and advisor in the Oﬃce of the Managing Director during the crisis, to discuss these issues. Professor Ito has agreed to serve as a discussant and to lay out his own views on needed IMF reforms.

Jerald “Jerry” SCHIFF retired from the International Monetary Fund in 2015. He last served as Deputy Director of the Asia and Pacific Department at the IMF, where he led the institution’s work on India, Korea, Myanmar, Singapore and Japan. He served in a number of other positions at the IMF, including as Senior Advisor in the Office of the Managing Director, and as a Division Chief in the European Department, where he led the IMF’s work on several Easter European countries. Jerry is and Adjunct Professorial Lecturer at American University School of International Service and has spent several semesters as a Visiting Lecturer at the University of Tokyo’s Graduate School of Public Policy. He has also served as a consultant to the IMF’s Institute for Capacity Development, helping to design and teach classes to Asian and European country officials.

Takatoshi ITO, Professor at School of International and Public Affairs, Columbia University (since 2015) and Senior Professor, National Graduate Institute for Policy Studies (since 2016), has taught extensively both in the United States and Japan since finishing his Ph.D. in economics at Harvard University in 1979. He taught at the University of Minnesota (1979-1988), Hitotsubashi University (1988-2002), and the University of Tokyo (2004-2014). He held visiting professor positions at Harvard University, Stanford University, Columbia Business School, and University of Malaya. He has distinguished academic and research appointments such as President of the Japanese Economic Association in 2004; Fellow of the Econometric Society, since 1992; Research Associate at the National Bureau of Economic Research since 1985. Ito served as Senior Advisor in the Research Department at the International Monetary Fund, 1994-97 and as Deputy Vice Minister for International Affairs at the Ministry of Finance of Japan, 1999-2001, and a member of the Prime Minister’s Council on Economic and Fiscal Policy, 2006-08. He is an author of many books including “The Japanese Economy” and more than 70 refereed journal papers. He frequently contributes op-ed columns to the Financial Times. He was awarded by the Government of Japan the National Medal with Purple Ribbon in June 2011 for his excellent academic achievement.

Toshiro NISHIZAWA has been a faculty member of the University of Tokyo’s Graduate School of Public Policy (GraSPP) since 2013 after serving as Director General of Country Credit Department at Japan Bank for International Cooperation (JBIC). He also served as Deputy Director General of JBIC Institute and was involved in JBIC’s country operations in Asia. His earlier professional career includes positions at the Ministry of Foreign Affairs, IMF and the World Bank. Mr. Nishizawa holds a BA in economics from the University of Tokyo and an MSc in economics from the University of Wisconsin-Madison. He has written articles on Asian economies and Public-Private Partnerships (PPPs). He was a visiting professor at Chulalongkorn University in Thailand and EAESP-FGV in Brazil.